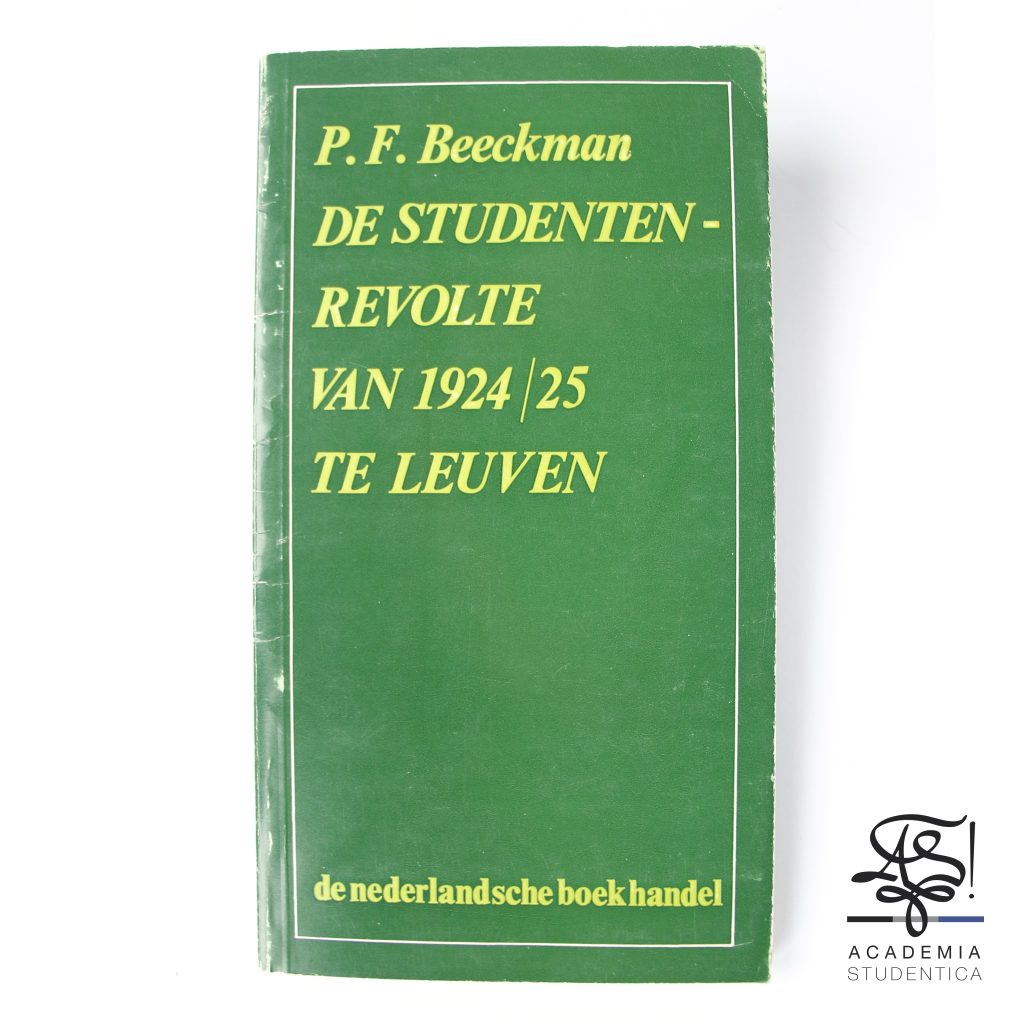 Paul-Felix Beeckman was born in Ninove on 24 January 1900. At the end of the First World War he studied law at the Von Bissing University, the University of Ghent under German occupation. It was not until 1922 that he was able to continue his studies at the KULeuven. Here he immediately joined the editorial board of the "Algemeen Katholiek Vlaamsch Studentenverbond" (AKVS) and published in "Ons Leven". In 1924 he became chairman of the "Katholiek Vlaamsch Hoogstudentenverbond" (KVHV) in Leuven.

In this work he discusses the run-up to and the development of the student revolt in which he played a role.

It was a time of great tension at the Leuven Alma Mater because of the language issue that arose. Demonstrations and congresses followed each other in rapid succession, and several magazines performed a literary joust. On the streets, too, there were regular physical encounters between Flemish and Walloon students. The breaking point, however, followed in the early morning after the IXth Great Dutch Student Congress. This congress took place despite several attempts to boycott it. At the end of the meeting, two Flemish students walked to their quarters when they were attacked by a group of French-speaking students. One of them, Gabriel "Gaby" Colbacq, got hold of the cap of a Fleming, who in turn drummed up his comrades to find the cap. Two students, among them Berten Vallaeys, found Colbacq and started the chase. However, Colbacq fled into his dorm and shot his pistol at the students through the doorway. Vallaeys was badly injured and was taken away. Colbacq was arrested and confessed that he had acted out of racial hatred.

When the students returned to Leuven after the Easter holidays, an announcement was published by the academic authorities forbidding any manifestation, the so-called 'Avis of May 3, 1924'. They also discovered that Colbacq had come off with a very light punishment, which stirred up the Flemish students because the ordinance seemed to be directed against them. The KVHV, led by Beeckman, protested against this. Beeckman was called to the Vice and without any chance to defend himself he received the Consilium Abeundi, which meant he was sent away from the university.

The Vice President of the KVHV, Gerard Romsee, wrote an open letter to Rector Ladeuze to defend his comrade and ask him to revoke his decision. Romsee was summoned to the Rector, who confided to him that he had to take into account the university's financiers and made it appear that the conflict could be resolved. A few days later, however, Romsee was summoned to the Vice, who threatened him that if he did not reconsider his opinion, he too would be sent away. Romsee asked and received a new interview with Rector Ladeuze, who suddenly became very combative and proclaimed that he would not tolerate any expression of Flemish 'extremism' at his university. Romsee was allowed to continue his studies, but was sent away the following year because of the organisation of an unauthorised meeting.

The situation escalated further because the French-speaking and Flemish student associations were openly in conflict, and the French-speaking people were allowed to manifest and gather undisturbed. The academic authorities tried to undermine the power of the KVHV through the press, which had an opposite effect. The KVHV reacted by calling on all Flemish people to stop all financial support to the university, both directly and indirectly. This move struck like a bomb. However, the bishops mercilessly retaliated and threatened to banish anyone who participated in the boycott or any other action against the academic government.

The KVHV responded in a conciliatory manner, trying to restore peace by admitting that it was wrong of them to call for the university to be denied part of its funding. Three days later, on March 10, 1925, Rector Ladeuze pronounced the dissolution of the KVHV. Anyone still participating in its activities would be punished with exclusion.

However, the KVHV reacted ludicrously by stating that it did not consider itself dissolved. The conflict continued.

Relations between the KVHV and the government remained tense until 1930. The 'Avis of 3 May 1924' was never explicitly revoked, but quietly disappeared into the background.