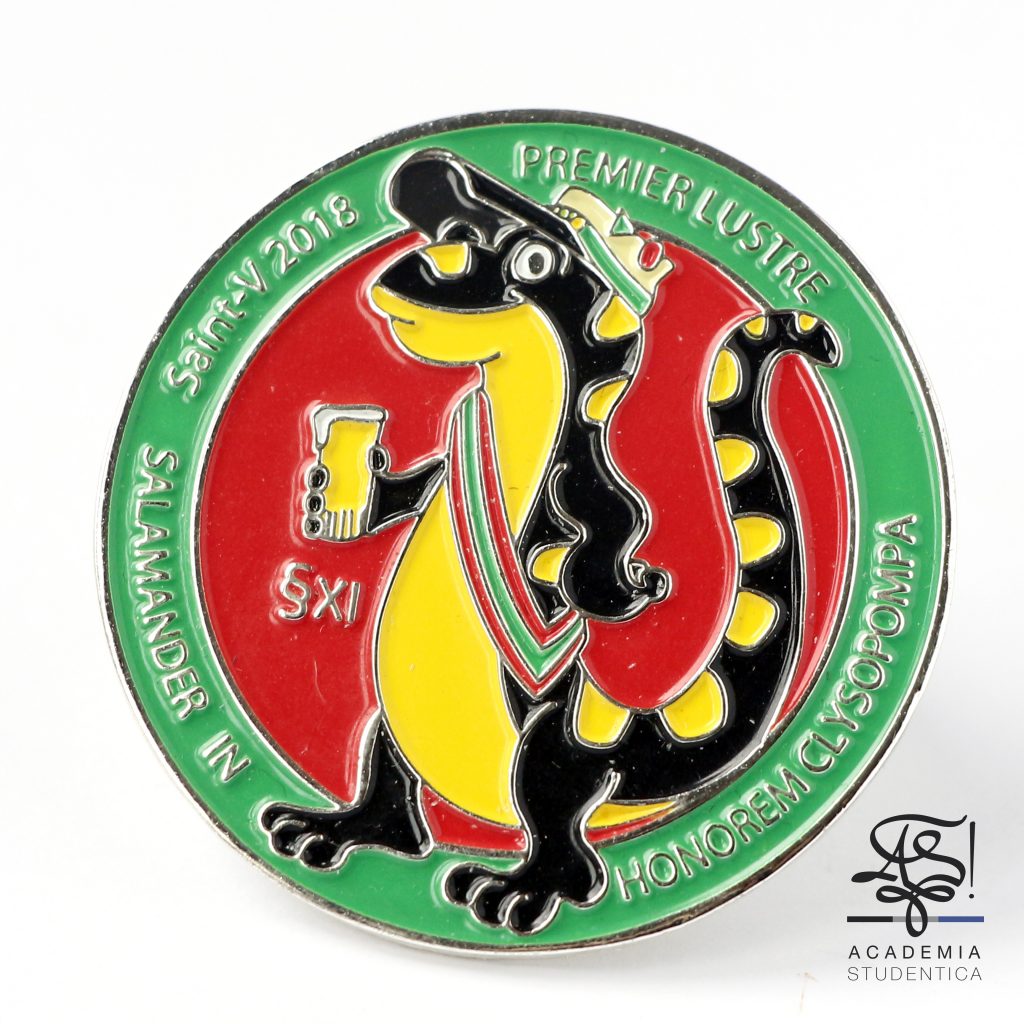 Between 1900 and 1914, there was a Student Circle at the ULB called «Clysopompiers». Little is known about this group, except that they met at the «Cabaret du Diable-au-Corps». The only historic traces are an invitation card for the banquet on the occasion of the closing of the «Diable-au-Corps», and a mention in the university newspaper.

The name was derived by merging the words «Clysopompe» ( = a clyster) and «Pompier» ( = a fireman). In the 19th century, many student circles gave the title of Fireman to the member in charge of the drinks service. Since the 19th century, students have used the injector to pour drinks for their classmates.

On 16 May 2014, eleven students gathered in the bar «La Bécasse» to sing and drink, and continued at theater «Toone». It was on this evening, filled with several «Salamanders» that the «Société du grand Clysopompe» was founded.

Their colors are Red-Green-Red, like the city of Brussels. Their blason is divided in three fields: the right one is black with their monogram in gold. The left one shows their colors. The bottom field is gold and shows a salamander in black.

They have their own codex with a set of rules. The most famous phrase in it may very well be §11: « Fraternité, tu nais entre les verres. Amis, buvons à la Fraternité! » (Tr.: Brotherhood, you are born amidst glasses. Friends, let's drink to Brotherhood!)

In 2018, the SGC decided to build a shrine which featured a salamander, similar to the one on the medal. In addition to being an amphibian, it is also an ancient drinking ritual, which has been revived and upheld by the SGC. In the shrine, the salamander lies on a bed of embers which is fuelled by a songbook, a beer mug and a clyster representing singing, beer and ceremonies respectively.  The colours of the SGC are present with red in the background and green in the border, as well as the first appearance of "§XI", a reference to article 11 of the Society's Comment, which states: "Fraternité, tu nais entre les verres. Amis, buvons à la fraternité!" (tr.: "Fraternity, you are born between glasses. Friends, let us drink to brotherhood"), two lines from the magnificent "Student March", written by Paul Vanderborght.

This medal celebrated the society's first Lustrum and was designed by Sébastien Laurent.